In the UK clay brickwork experiences thermal expansion for up to 20 years after the bricks have been moved from the kiln. Typically, most expansion occurs within 6 months, but as the process is irreversible, this movement needs to be accommodated by using movement joint fillers, or expansion joint foams.

Thermal expansion can cause the bricks/walls to creep and warp, especially during dry cold weather. This problem has only existed in brickwork post 1890, before then, lime mortar was used and this allows bricks to expand because lime mortar does not cure (harden completely). In addition to this, in those days, cavity walls did not exist, so the solid walls also had to carry the loads of the floor and roof structure; it was these additional loads that helped the walls to avoid movement.

In the UK, all building elements have to consider movement. Over the course of time, foundations settle and respond to clay heave. We build in movements joints and wall ties to allow such flexibility in our structures. Although wall ties bond the inner and outer leaf together, they are durable enough to allow for movement. Wall ties should be installed every 450mm in vertical joints and 900mm in horizontal joints. They should be arranged in a diamond formation. Where a movement joint exists, wall ties should be placed within 225mm either side of the joint and spaced every 300mm vertically (every blockwork course). Blockwork in particular is notorious for drying, so provisions for such movement is very important. 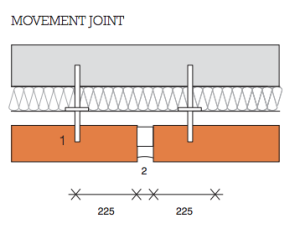 Movements joints and their size vary depending on the size of the wall. 1.3mm per linear run of brickwork should be allowed, so a wall that has movement joints at 9m centres should have a joint of 12mm. These principles generally apply to both horizontal and vertical joints. High walls tend to experience greater movement towards the top of the wall, than in the lower extremities. This is because of greater loads in the lower parts of the wall. Movements joints are typically constructed and filled with low density expansion and movement joint filler. This filler is constructed of closed cell foam, that is quick and easy to install, it’s waterproof and recovers after compression.

One of the most common faults in brickwork caused by lack of movement joints can often be seen in long garden walls. The walls often warp and creep over time, and this is simply caused when no movement joints are installed.